The NAV real time invoice reporting process launched in July was like a competition where the contestants tried to complete the racetrack in "vehicles" purchased off the shelf or developed and built by themselves. The June test period was prolonged by a useful leniency month, thus all entities were required to come up to par by 31 July while continuous compliance has been mandatory since 1 August.

RSM acted as a technology partner for companies that prepared their own system for the new requirements but could not have been completed it on time without external support. Through our unique cloud-based ConnecTAX service, businesses can continue to use their existing devices without any major transformation and still comply with the regulations.

The development of this solution meant an important milestone also for our team in the product development journey aimed at the digitalization of financial processes. By the end of the second month, our system had already processed several thousands of invoices, thus we were able to draw and share some useful conclusions in the field of online invoice reporting, also having regard to the stringent GDPR compliant data protection guidelines.

The leniency month was very useful

Our actively used test infrastructure that we incorporated into the preparatory process of businesses as a "quasi-mandatory" component before launching the live version performed really well. The extension of the transition period was extremely useful for those that actively worked on developing their data reporting system. As several businesses were only able to prepare their systems for live reporting by the end of July, the potential problems were detected already in the test environment and could be rectified prior to going live. Subsequently, any invoices there were left out of real-time reporting during the leniency period could be added by the end of July.

As was expected, businesses with their own unique systems did not only need a data reporting solution but also VAT and/or IT advise in order to achieve legal compliance. The majority of these entities were only able to complete the in-house development efforts in their own invoicing software and harmonize their invoicing practices with the legal requirements by involving our experts in the process. 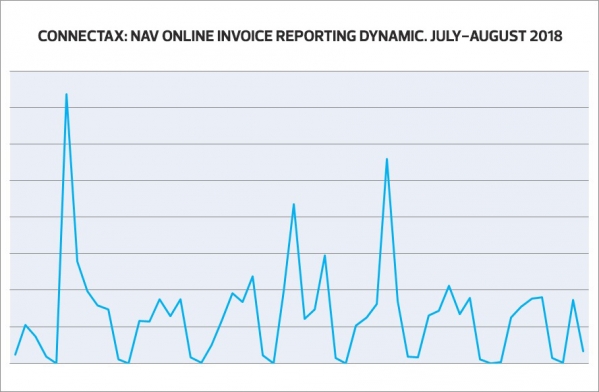 The chart reflects the changes identified by us in the invoice reports between 1 July (left) and 31 August (right). One can clearly see the highs related to the two deadlines.

There could be more than twice as many invoice reports

Almost half of the invoices processed by ConnecTAX were not subject to the Decree pursuant to the screening conditions managed by clients (e.g. the HUF 100,000 VAT threshold) and thus were not reported to the tax authority. Accordingly, it is fair to say that businesses may report up to more than double the current invoice volumes to the tax authority should this become necessary due to any future amendments in the regulatory conditions.

According to the feedback received from NAV, almost one-third of the reported invoices were problematic at the beginning of July, i.e. an error message or some warning was received on the report from the tax authority. The ratio of successful reports rose above 80 percent In August, while the ratio of invoices that required some sort of reworking declined below 20 percent.

The number of WARN and ERROR messages received from the tax authority decreased slowly but steadily. Some of these errors were due to template validation problems. Of the 11 potential error messages we recorded 7 types and we came across 18 different warnings of the roughly 90 possibilities that were previously known from the tax authority's relevant documentation.

In parallel with the improvement of the success rates of our clients, we experienced decelerating processing speeds by the tax authority. While the average lead time for an invoice was 10.1 seconds in July, it rose to 13.1 seconds by August. The majority of detected major slowdowns (in excess of one minute) occurred in the second half of August.

In the first two months of reporting

However, we found a continuously accessible and functioning service behind the aforementioned figures. Until September, we had not experienced any major malfunction or outage in the NAV system. In our experience, the tax authority had permanently and continuously ensured the technical conditions for all businesses concerned to be able to submit their real-time invoice reports.

For the time being, we have no direct experience as to the tax authority's audit and penalty practices, however, it is expected that audits will begin in the weeks ahead and businesses that are lagging behind with their data reporting obligations can expect to be instigated to comply with the regulations by means of warnings and also penalties.

As co-founder of dotindot Solutions, he manages the digital solutions division. He is qualified as a Technical IT expert and has over 10 years of experience in the planning and design of web-based IT systems.
Currently he is working as leading developer and project manager in the shaping, continuous development and operation of innovative digital tax services and IT systems made for RSM Hungary and its clients.

In cooperation with our legal, tax and VAT experts, our digital tax business line prepares automated solutions to support companies in the preparation of tax returns and the fulfillment of their invoice data reporting obligations.
Due to our online tax and finance administration support solutions, we provide services for our partners adjusted to the current regulatory framework and the actual expectations of Hungarian and international small- and medium-sized enterprises.