Despite the global crisis, the number of businesses grew spectacularly in recent years in large emerging economies. While from 2007 to 2011 the number of active businesses increased by only slightly more than 3 percent in the most developed countries of the world, there was a 25 percent growth in this regard within the BRICS group of the largest emerging countries – the survey “Business Births and Deaths” of the international financial and tax consulting network RSM International reveals. News is even worse from a Hungarian perspective as we have the worst result even within the European league: in 2011, the number of active businesses exceeded that of 2007 by only 0.3 percent.

“The number of active businesses reflects as a sort of indicator the global economic trends of the past few years, which can be observed clearly on growth rates” – Zsolt Kalocsai, chairman-CEO of RSM DTM Hungary points out in relation to the survey. The growth of the global weight of the BRICS team of leading emerging economies (Brazil, Russia, India, China and South-Africa) has become even more dynamic since the crisis emerged at the expense of the G7 consisting of most developed national economies (the US, Japan, Germany, France, Italy, Great Britain and Canada). 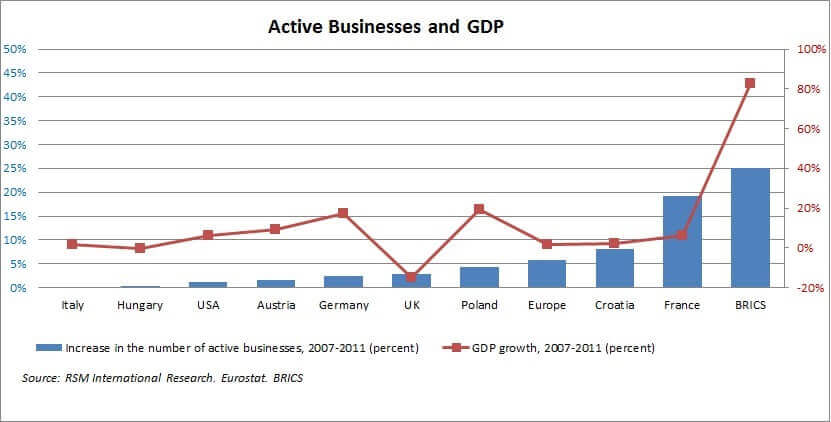 It is interesting, however, that large differences can be observed within Europe, which was hit hardest by the crisis, and even among G7 countries. The number of active businesses grew by 19.1 percent in France during the period under review, for instance, while the second largest member state of the EU performed rather poorly in terms of other economic indicators. A programme launched in 2009 to facilitate the starting of new businesses (Auto Entrepreneur) played an important part in this spectacular growth in France which is otherwise more known for its bureaucracy.

As to Hungary’s smaller region, the number of active businesses was higher in Croatia, Poland and even in Austria where this index was also rather low.

The dynamics of business births and deaths is driven by a number of factors including, for example, the administrative cost and the time required for starting a new business and the level of relating red tape. Another important factor for start-ups is the availability of loans and the regulatory environment applicable to creditors and borrowers.

“An easier start for businesses could facilitate the founding of new SMEs and the EU could play an important role in this process. A simplification of export rules would be equally important, especially for those SMEs which cannot grow any further without cross border business relationships. The fact that in the 2007-2011 period Hungary’s 0.3 percent growth in the number of active businesses was much lower than the European average of 5.7 shows that the situation is particularly bad in our country. That is why enterprises need to get proper funding and the administration must always strive to help them in this regard” – Zsolt Kalocsai points out.

Protection of the rights of investors, however, not only has a key role in the founding but also in the seamless liquidation of businesses. As to the latter, the quality of bankruptcy and liquidation regulation is an important factor. “It also boosts the willingness to start businesses if entrepreneurs do not have to bear a permanent seal of bankruptcy as a result of the liquidation of their businesses. This, however, is more a matter of entrepreneurial culture than that of regulation” – Zsolt Kalocsai adds.

An interesting statement of the analysis of RSM International is that beside the importance of these factors, there are a number of examples where, despite unfavourable circumstances, there are exceptional dynamics in the founding of new businesses and forcing of others from the market. BRICS countries are a good example in this regard. While, in most of these states, the business environment is not too favourable from a regulatory and administrative perspective, they show outstanding dynamics in the starting of new businesses. Another interesting example is Germany, which, despite its excellent competitiveness an good growth rate, has a rather weak position in terms of start-ups as the number of active businesses only grew by 2.4 percent from 2007 to 2011.

“Despite the complexity of the factors driving the dynamics of the creation of new businesses, the results of the analysis suggest that in many cases there is a strong connection between the dynamics of the economy and the intensity of rejuvenation of the business sector. This is especially true for the number of start-ups surviving their first 2 to 5 years in business as these are the companies to lay the foundation for sustainable economic growth” – Zsolt Kalocsai draws the lesson from the analysis.

Chairman of the Board
Managing Partner

The founder of the RSM group with more than 20 years of experience in accounting and the domestic and international taxation of medium-sized companies and multinational conglomerates. In addition to leading RSM, he is actively involved in the design of Hungarian and international tax structures, private wealth planning and corporate restructuring. He is a member of the Presidium or Supervisory Board of a number of organisations.

In addition to our accounting, tax, payroll and HR advisory activities, our partner audit firm also plays an important role in allowing us to offer a comprehensive service package to our clients.